GWNS has awarded four post-graduate scholarships, five study grants and a travel grant to North Shore women scholars.
The 2019 awards were presented at a High Tea held at the Masonic Centre in Albany. 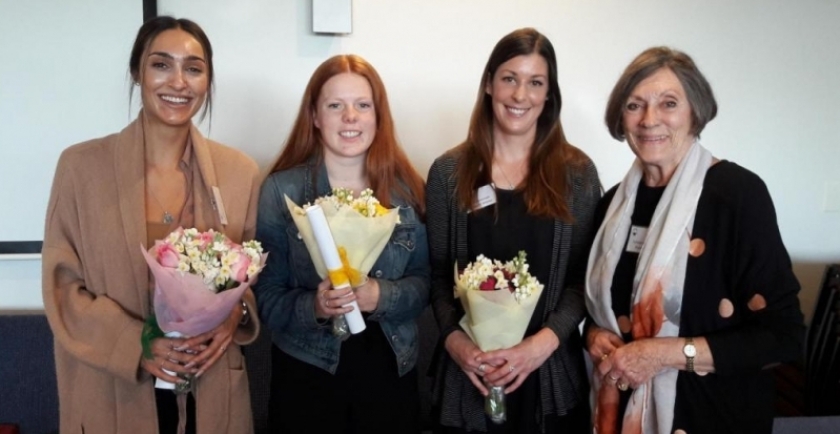 In making the presentation the Graduate Women North Shore branch President, Carolyn Harvey, noted that over the twenty years that these awards have been offered, the range of study areas women were undertaking had widened greatly. Over the two decades 142 scholarships and awards have been made with a total value of $500,000
This year’s recipients of post graduate awards were:
Tanisha Pereira from Henderson. Tanisha holds a Bachelor of Engineering with Honours and is undertaking Doctoral studies into technologies that can be implemented in situ to analyse defects in parts while a machine is in operation. Tanisha was awarded $8,000
Adi Papirany from Torbay holds a Bachelor of Arts Hons and is enrolled in the Doctor of Clinical Psychology. Her research is exploring cyberbullying – an issue affecting many people and particularly adolescents. Adi was awarded $5,000
Alice Stevenson lives in Bayview and holds a Bachelor of Science, and a Bachelor of Science Hons in psychology. She is now undertaking Doctoral studies in Clinical Psychology. Alice is investigating systemic factors such as power imbalance which lead to marginalisation and disempowerment of people. Alice’s award was $2,500
Emily Palmer from Unsworth Heights has a Bachelor of Natural Sciences, and a Master of Science in Conservation Biology. For her Doctoral studies, Emily is researching areas of marine mammalogy, ecology and conservation and was awarded a $2,000 travel grant to attend the Second World Marine Mammal Science Conference which is to take place in Barcelona in December this year.