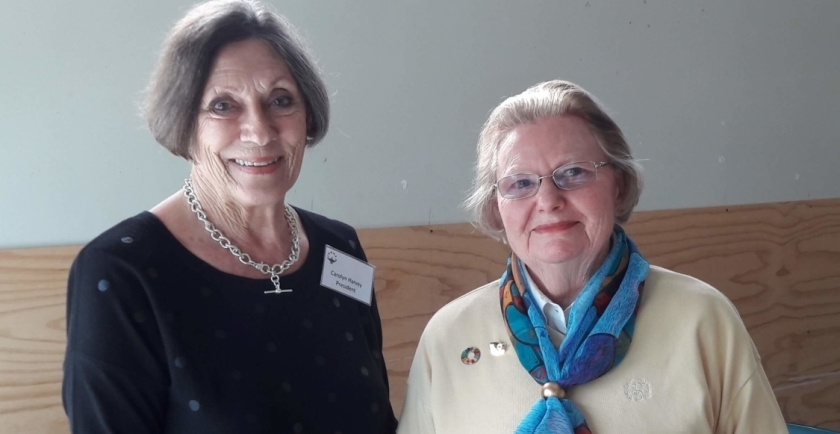 The Branch congratulated Beverley at their morning meeting on June 6th. This honour is so richly deserved as Beverley has been deeply involved in Graduate Women affairs serving on the committee, and as President being the person who did the initial negotiating with Massey University, Albany, for the setting up of gowning, which the branch did for 25 years, for her
active role in PAC over many years and for numerous other activities of the branch.

Beverley has attended many national and international conferences and will be attending GWI conference in Geneva in July. Beverley was a Vice President of NZFUW for the term 1998-2000 and the NZFUW Convenor of International Relations (CIR) from 1996-2000.

In the early 2000’s, Beverley catalysed the establishment of the Pacific Graduate Women’s Network because she was concerned that graduate women in the Pacific Islands were missing out on possible networking, mentoring, and information sharing opportunities to advance their education and employment, as well as to strengthen human rights, especially the rights of women and girls to access affordable and relevant education in the region. For the past 18 years (2000 until present), Beverley has been the Convener of this network. She has maintained on-going liaison, connected women across the region, and shared information with graduate women and graduate groups in Niue, Papua New Guinea, Republic of the Marshall Islands, Federated States of Micronesia, Kiribati, Northern Marianas, Palau, and Tuvalu. Her involvement with Pacific Women’s Watch was fostered by her concern for the education and welfare of women. Locally this has also been visible with her involvement and support for the Shakti Asian Women’s Centre.

In 1994 Beverley was the NZFUW representative on NZ’s Non-Governmental Organisation (NGO) Co-ordinating Committee established in preparation for the UN Fourth World Conference on Women, Beijing, 1995. Following the Beijing Conference, Beverley played a significant role in feedback and follow up to New Zealanders and the government. Through a long involvement with UNIFEM, Beverley, among other achievements, introduced the White Ribbon campaign to NZ. She has also been centrally involved in NGO Human Rights Network from 2000 to the present. Congratulations Beverley!