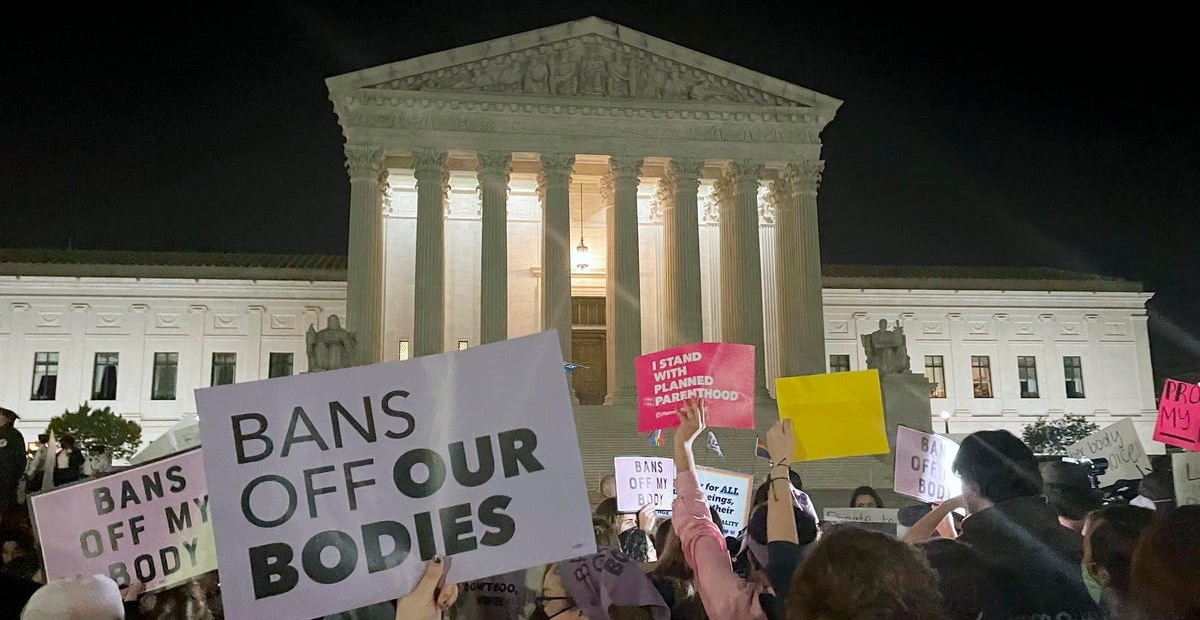 Roe v. Wade, the landmark case of 1973 which constitutionally protected a woman’s right to access abortion care, was overturned last Friday in the United States by the Supreme Court. So, what does this mean for the women of America?

Essentially, American states can choose how they legally manage abortion – meaning states can enact abortion bans and ‘foetal heartbeat’ laws, which ban abortion as soon as foetal cardiac activity can be seen via ultrasound. This ‘foetal heartbeat’ however, is merely a group of rudimentary cardiac cells which emit electrical activity – not a heart and cardiovascular system. This activity can be picked up as early as six weeks into pregnancy, before many women who aren’t expecting to be pregnant even know they are.

Women and those with uteruses will be forced to travel possibly hundreds or thousands of miles to seek care, which of course requires the means with which to do so. Those who attempt to self-manage an abortion with herbs, medications, or more invasive means are at risk of illness or death. Others will be forced to carry pregnancies to term against their will – essentially forced birth, also known as slavery - regardless of whether they have the means or ability to care for that infant beyond birth. Further, those who experience miscarriages may become subject to criminal investigations, as well as the medical professionals who support them through these. Finally, women for whom abortion is a life-saving procedure, such as in instances like septic uterus or ectopic pregnancy, may not get the care they need, which can lead to death. While this impacts all women, it is crucial to recognise the intersectionality which will also play out in new laws; meaning women of colour and those from lower socioeconomic backgrounds will suffer the most.

But why does this matter to New Zealand? Abortion was legalised in this country just two years ago, whereas Roe v. Wade made precedence nearly fifty years ago, and yet has been struck down. Some MPs have said they won’t seek to change this law, however, as we’ve seen with the supreme court justices who stated Roe v. Wade would not be overturned, and then actively sought to do just that, those in positions of power are not always honest. Others, such as National MP Simon O'Connor, have openly celebrated the removal of the right to abortion.

The same fate could certainly befall Aotearoa women, and we must all remain vigilant and vocal to uphold the rights of women here. This could look like contacting your local representatives to voice your concerns; donating to organisations like Family Planning; educating yourself on ways in which people can access abortions within Aotearoa; openly sharing your concerns with friends and family, or on social media, to raise awareness. Show solidarity with the women of the United States by attending a local protest. And when it comes time to vote, make yours count by ensuring you're voting for a person and party with pro-choice views.

Those strong, courageous women who came before us showed up, stood up, and spoke up, to ensure we, our daughters, and our grand-daughters had a voice on what happens to our own bodies - and we must be sure we use ours to benefit those who come after us.